Thanks to the evolving regulations and X’PROCHEM’s advanced technology, we can now think about biosimilar medications free of endotoxins and without other rDNA production contaminants impurities i.e. “clean” biosimilars or “Biobetters” 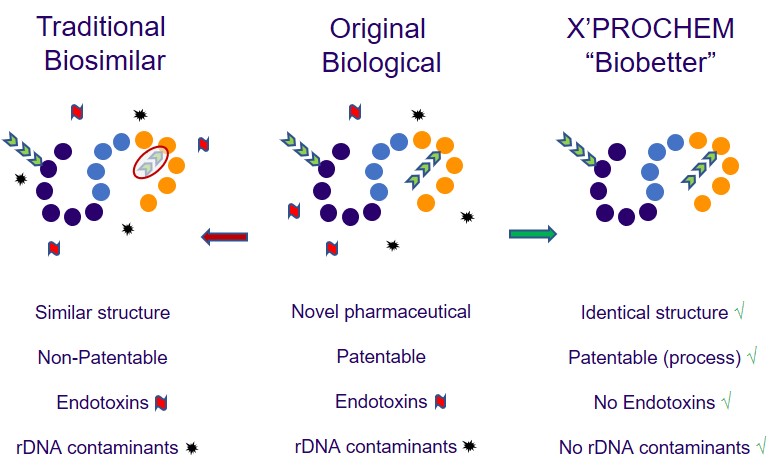 With cost-containment pressure throughout the world, the biosimilar market is poised to grow. Whereas biosimilar is a clearly defined regulatory term, there is no universally accepted definition for “Biobetters”.
Regulators approve biosimilars on the basis of their high similarity to an already approved referenced biological. A biosimilar shall have no clinically meaningful differences in terms of safety and effectiveness from its reference product.

In contrast, we propose that a Biobetter produced by X’PROCHEM’s advanced mid-size protein technology, would have a structure that is identical to the referenced biological, not just similar. And thanks to our precise chemical synthesis technology, our Biobetter would be free of endotoxins and other rDNA contaminants, which are inevitable when using recombinant fermentation-based production.

These may generate strong differentiation against traditional biosimilars and provide great competitive advantages. Moreover, protection of the Biobetter through a “Process Patent” could certainly be attempted.

Any cookies that may not be particularly necessary for the website to function and is used specifically to collect user personal data via analytics, ads, other embedded contents are termed as non-necessary cookies. It is mandatory to procure user consent prior to running these cookies on your website.